Butterfly #2 hatched this morning as expected and was transferred to the enclosure for a couple of hours in the sun to dry and warm up/strengthen its wings.  #1 was still in there as it was too late to release it yesterday.

Both of them were successfully released this afternoon and immediately flew away!

#3 is still in its chrysalis, but we managed to successfully transfer it out of the plastic container and into the butterfly enclosure so I no longer have to worry about it not having enough room to spread its wings after it hatches.  The chrysalis is already turning dark so I imagine we'll see it sometime in the next day or two.

After that...it'll be a couple of weeks before the next wave is ready to hatch.  I've got one brand new chrysalis that just formed a couple of days ago and one caterpillar that looks big enough to become a chrysalis any day now.

I certainly never thought a simple request for ONE milkweed plant would lead to all of this LOL!  Be careful what you wish for! 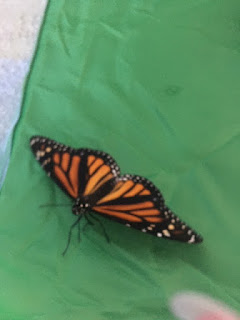