Every year I like to do my own personal take on the Oscar fashions. Except last year when I forgot about it so let me rephrase...

MOST years, I like to do my own personal take on the Oscar fashions. Best hair, makeup, jewelry, etc. Best and worst dresses. Those that could go either way. And some special categories for miscellaneous awards like Best Couple.

Let's start off with the "Bests":

I have a tie for Best Dressed between: 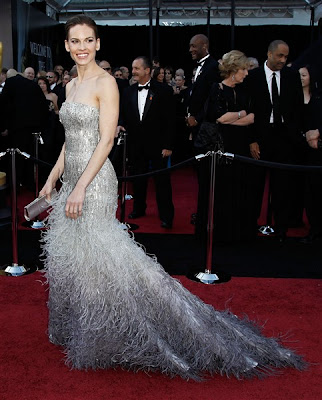 Hilary Swank - I didn't even see this dress up close on the Red Carpet - just passing by in the background as Gwyneth Paltrow was being interviewed and I was all "Wait! Stop! Go Back! WHO is wearing that AMAZING feathered, glittered thing?!" In the distance of the shot, we thought it might have been Jennifer Garner, but then I wake up this morning to check and find out it was Hilary. I admit this look is over the top and hard to pull off, but DAMN! I think she totally did!

In total style opposition but equally as amazing... 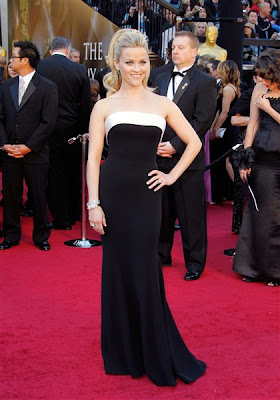 Reese Witherspoon. Love the simple drama of the dress and she wins hands down for best hair and makeup. 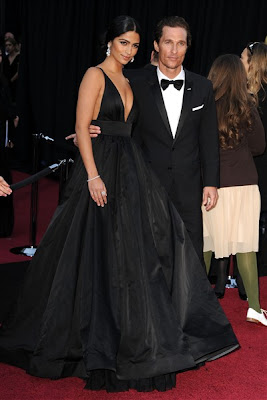 Camilla Alves and Mathew McConaughey. That much genetic perfection shouldn't be allowed to coexist in the same space for fear of causing a rip in the space-time continuum. 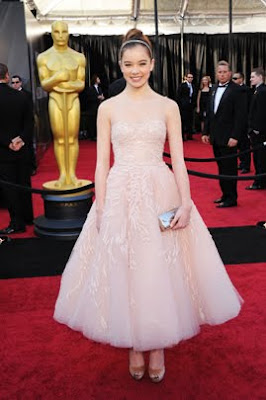 Hailee Steinfeld. TOTALLY age-appropriate, but still glamorous, young and fresh looking. In fact, she wins this category for the last five years as far as I'm concerned. I hope her peers in her age group take note. 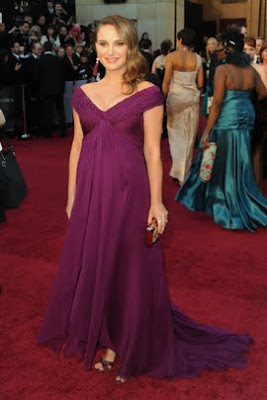 Natalie Portman. Being preggers on the Red Carpet has been kind of a trend over the past few years and some actresses have pulled it off well while others haven't. Natalie gets it totally right. The color is awesome and I love how the dress shows off her pregnancy without crazily focusing in on it to where all you see is the bump and you lose the woman carrying it. Here, the focus is all on Natalie. Brava!

Normally, I have a category for best jewelry, but I couldn't find a picture of the piece I liked the best - Annette Benning's AMAZING emerald drop earrings. Honorable mention goes to Nicole Kidman's diamond choker, but I really prefer colored stones.

Now we enter my "could go either way" category: 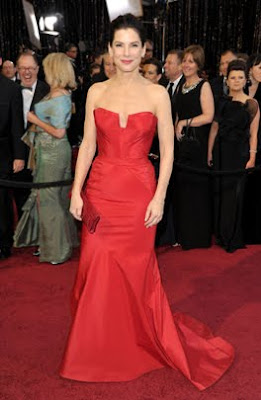 Red was a trend in dresses this year, but I'm not a huge fan of wearing it to Red Carpet events. I feel like you blend into the background of the carpet too much. I prefer dresses that provide contrast. Still, in the battle of the reds, I have to give Sandra Bullock a narrow edge of victory on the DRESS part. I feel like her hair is a little severe. 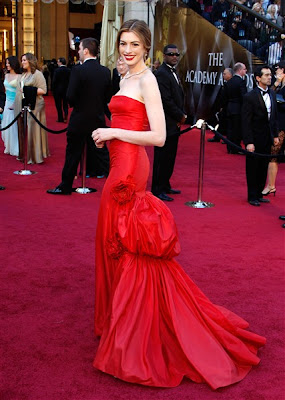 Anne wins in the hair and makeup category, but I am NOT a fan of the "below the butt pouf" on this dress. Is she storing snacks in there for later or...? I much preferred the white dress with beaded accents on the bodice that she wore during some of her hosting sequences on the show. 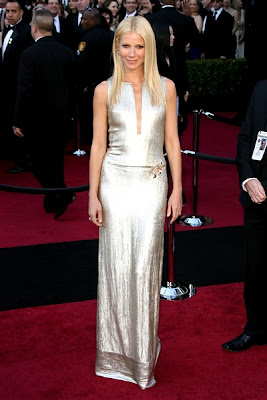 Gwyneth Paltrow gets a mixed review from me, too. I liked this dress (btw - it was MUCH more gold-looking on TV than in this picture where it reads as almost silver) when I saw her being interviewed at arrival, but it was only from the waist up. I'm not sure I like it in full-length - there's something weird about that seam running across her tummy. And while I liked her unusual multi-colored jewelry (pin and earrings) by themselves, I wasn't crazy about them with the dress and definitely didn't like the placement of the pin at the waist seam. It looks like some kind of weird growth. 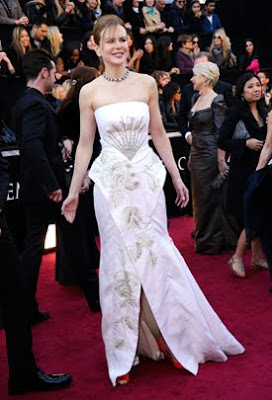 Nicole Kidman - This was another dress that I liked on TV but today, I'm not loving it as much. Also not crazy about the day-glo shoes. I think a beautiful metallic shoe would have been a much better choice. 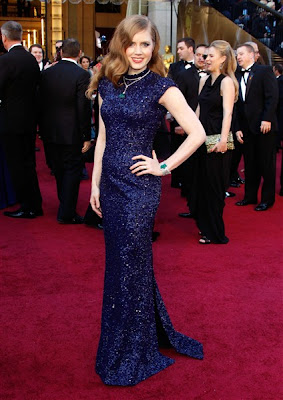 I wanted to love Amy Adams' dress. Really, I did. Because I really like her as an actress. I think she's terriffic. But, at the end of the day, the dress was NOT terriffic. It's too covered up at the top and somehow manages to look cheap even though I'm sure it's a designer dress that costs thousands. Also, the necklace gets totally lost - she might as well not have bothered to wear it.

If you're going to wear all-over sparkliness, this is how to pull it off: 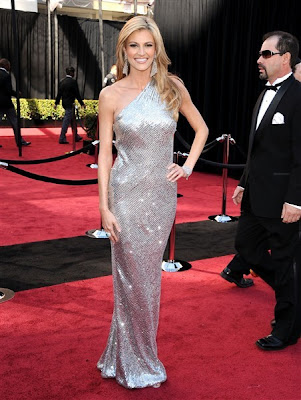 And now for the WORST: 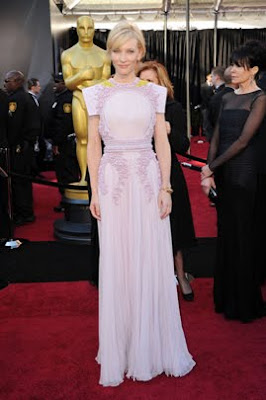 Somehow, Cate Blanchett managed to put the keyhole back of one dress over her grandma's nightie and call it an Oscar dress. And yeah, I know at least one website voted this "Best Dressed." But I disagree. Vehemently.

Okay, the color is pretty, but given the rest of the dress, who really cares? 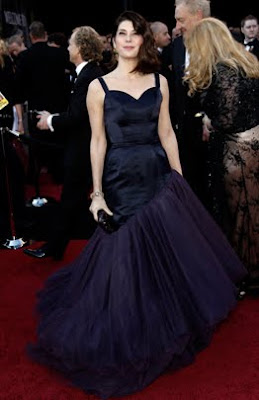 Now, I saw Marisa Tomei being interviewed last night and thought she looked pretty good...but she was only shown from the waist up.

Her hair and makeup were nice, though. 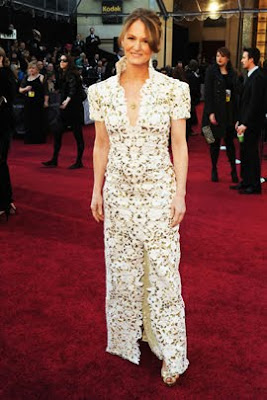 To be fair, I hated Melissa Leo's dress even BEFORE she gave that craptastic speech. And no, I don't really care so much that she dropped an F-bomb (although it WAS tacky), but she just kept RAMBLING. We were all yelling "cue the music" so they would cut her off and get her off the stage, but NOOOOO...they just kept letting her go. Shut UP, already!

And then taking poor Kirk Douglas's cane - wtf was THAT about? 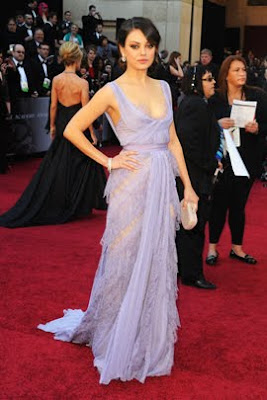 Mila Kunis - great color, but why did she feel the need to put her dress through a shredder right before she got in the limo? Also, opinion seemed to be split as to whether the purple lace things on her boobs were tatooed on or if that was just her bra showing.

And then there was the hot mess formerly known as Scarlett Johanssen: 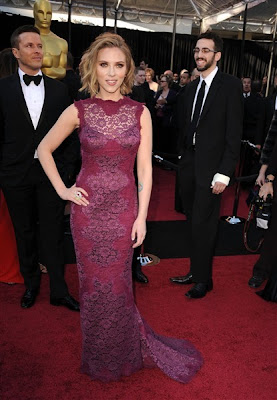 What the HELL happened to Scarjo? The dress is bad enough, but OMG her HAIR! And her makeup didn't do her any favors, either. Of course, when I said all this out loud, my brother forcefully informed me that apparently, Scarjo could show up covered in slime mold and still be the hottest thing on the Red Carpet.

Still, I was totally prepared to give her my #1 Worst Dressed, but then I saw this: 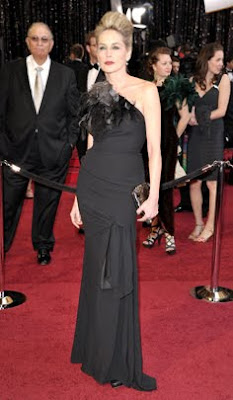 Sharon Stone decided to attend dressed as the "Bride of Frankenstein - 2011 version."

So she wins the title.

Who did YOU vote for best, worst and "could go either way?"

This Week in Kid Quotes

Last night after spending a few hours with Grandma, the kid tells me at bedtime, "Grandma is kind of a drama queen, isn't she?"

Yeah, I'm not touching that one with a 10 foot pole!

I'm sitting here at the kid's dentist's office trying not to go out of my mind while the kid is in back getting a bad baby tooth pulled. Poor guy.

But at least he gets gas for it. Where are the drugs for the quietly going insane parents? If anyone needs laughing gas, it's me!

Add this anxiety to that produced by the ex pressuring me for more visitation all week and I'm totally ready for the rubber room!

I hope everyone else had a better week.

Published with Blogger-droid v1.6.5
Posted by Silver Parrot at 9:06 AM 9 comments: