Because I have PICTURES!! Yes, that's right - the drought is over. Life seems to be (knock on wood) turning around a bit for me so hopefully I'll have more time to blog and even more interesting pictures to post.

In the meantime, does anyone know if dunce caps come in parrot sizes? Because this parrot needs one. Seriously. Turns out the website has been down for the last several weeks due to a problem with my hosting company (and yes, they tried to notify me, but had the ex's e-mail on file so...'nuff said). Anyway, problem is fixed now and the site is back up so shop to your heart's content. I may even have some new merchandise to upload soon.

In fact, here's a picture of an embroidered bracelet in progress:

The center stone is a pale pink dichroic glass cab with swirls of gold, lavender and green in it. I've accented it with lavender freshwater pearls and seed bead embroidery in shades of teal, green and lavender. Eventually, this beaded piece will be mounted onto a cuff bracelet blank and backed with purple suede and beaded edging. Er, that is, it will if I ever get around to finishing it.

More pics brought to you by the fact that my friend Laura and I went to the LA Gift Show at the convention center yesterday and got ourselves into quite a bit of trouble - but the good kind of trouble that results in fun bead pictures for the blog!

I went back to the pendant vendor that I had such good luck with at the show back in January and picked up a few more bargains from them: 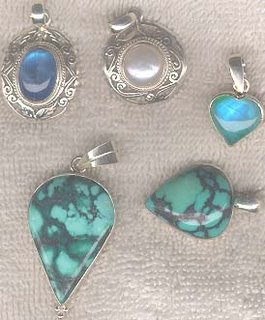 I think the Tibetan turquoise pendants are particulary pretty and the darker teal color in them is one of the hot colors for Fall '06 fashion. In fact, I already have a pair of d'Orsay style heels in that shade...not that I was thinking of those shoes when I bought these pendants or anything.

I also visited my favorite gemstone vendor at the show and picked up this fabulous strand of Amazonite pebbles: 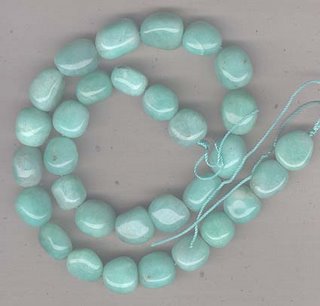 Don't they just make you think of the the way the ocean looks around a tropical island? Of course, I'm always a sucker for the blue/green/aqua/turquoise colors...

That's it for this entry - have to save some more delicious surpises for the next entry!

Hope every had a nice weekend!

A (small) book review and other thoughts...

First, the book review (such as it is). Who knew that I'd have LESS time for reading while unemployed than I did when I was working full time? I guess I no longer have that dedicated hour in the Toshiba cafeteria each day to read while eating my lunch...

Anyway, I did manage to finish a book this week and would you believe that Betsy Taylor, Vampire Queen, is up to her usual shenanigans in "Undead and Unreturnable"? I've been really enjoying this series for the light, fluffy, brain candy that it is, but this installment was not as good as the earlier books. Betsy is still her shallow, vain, vampire self and the dialogue is still snappy and humorous, but the plot was nearly nonexistent. Yeah, sure, the Driveway Killer is on the loose, but Betsy and crew seem to be hardly involved in the case at all until the book comes to a very quick (and very predictable) conclusion. Most of the action that occurs seems to be merely set up for things to be resolved in a later installment. I hate that. Also, Cathie the ghost is annoying and there's still too much in the way of graphic sex. But, for a summer beach or pool read, this series can't be beat and I suppose it's worth reading this book just to keep up with the storyline so you'll know what's going on in the next book. Or not.

I've got some more substantial books coming up in the "to be read" pile so hopefully future reviews won't be so "lite."

In personal matters, court tomorrow to resolve pretty much everything. I hope. This crap has been dragging on way too long and I just want it to be over. Things are looking up on the job front as well. I had an interview this week that seemed to go very well so I'm hoping I'll get an offer from this company soon.

But enough of that. I'll get to the good stuff. I met Literate Guy for a lunch date today! Okay, WOW! He is SOOOO cute! I don't know how it went from his end, but I had a great time. We talked until almost 4 PM. I think he was enjoying it, too, but maybe both of us just didn't want to brave the unbelievable heat wave going on outside?

Speaking of which... Dude! What is UP with the weather??? It is helluv hot outside and has been for over a month and doesn't show any signs of letting up and now we're getting humidity, too? WTH??? This is not supposed to happen in So Cal. We're supposed to be sunny and 75 like ALL the time. Who didn't get the memo?

Anyway, back to my lunch date. I've been out of the game so long that I'm not sure if a hug and an "I'll call you" is still a kiss-off or not, but that's how we ended things. Still, I would definitely go out with him again if asked. It was fun. And did I mention that he's CUTE???

So, wish me luck that all goes well tomorrow in court, the job comes through and (cute) Literate Guy calls me back!

Hope everyone had a great weekend!

P.S. I do have some jewelry coming, too. I've got another embroidered cuff project almost completed and I'm playing around with a multi-strand necklace design incorporating some fibers, silver chain and beads. We'll see what happens with it...
Posted by Silver Parrot at 4:52 PM 1 comment:

I had a job interview today at, of all places, El Pollo Loco. No, I'm not vying for the head chicken cooker position (shut up, Sparkle). The job is at their corporate headquarters where I would be an executive administrative assistant supporting two VP's and a director. It seems like the interview went well and I should hear something back by the end of the week so keep your fingers crossed! A steady paycheck means I'll be able to afford bead inventory and actually get this blog and jewelry business back up to speed.

In the meantime, I celebrated by hitting the anniversary sale at Nordstrom's where I picked up these to-die-for Calvin Klein boots. I know, I know, they really are utterly fabulous and what a deal at that price! Now, if it would only get to be fall weather so I could wear them to my (hopefully) new job as part of an equally fabulous outfit.

Carrie Bradshaw eat your heart out!

Literate guy CALLED me! And we have a lunch date set up.