Harry Eugene Morgan, Jr. (aka "Gene") passed away April 24th, 2009, at 2:40 AM. Following is his obituary and some pictures.
Gene was born on February 9, 1938, in Phoenix, Arizona and was the second of four children born to Harry and Mildred Morgan. He grew up in Phoenix and graduated from North Phoenix High School. He received an appointment to the United States Naval Academy which he graduated from in 1959 as a member of the 19th company.

After graduation, Gene served aboard the USS Fechteler and in the ROTC unit at the University of Colorado at Boulder. While there, he met and married Rebecca Reiland of Santa Fe, New Mexico, with whom he recently celebrated his 45th wedding anniversary.

During his naval service, Gene was posted to a number of places including Northern California, Idaho, Connecticut, South Carolina, Virginia and finally, Hawaii. During this time, he and Becky became the proud parents of daughter, Kelly, and son, Mark. While in Hawaii, Gene served on several nuclear submarines including the Benjamin Franklin and Lafayette. His time in Hawaii also led to a lifelong love of surfing.

Gene retired from the Navy in 1970 at the rank of Lt. Commander. He and his family settled in El Toro, California, and he took a job with Southern California Edison as a nuclear engineer. While with Edison, he worked in the Steam Generation department as well as on all three units at the San Onofre Nuclear Generating Station. He would eventually rise to become Vice President and Site Manager at San Onofre and held that title until his retirement in 1993.

During his life, Gene had a passion for surfing, skiing, reading and music and played competitive beach volleyball for many years. Always health conscious, he ran or worked out nearly every day until suffering a stroke in November, 2008. His charismatic personality and wonderful wit brought joy to everyone. He was generous with his time, responsive to the needs of others, and dearly loved his family, friends and neighbors.
He leaves to cherish his memory and celebrate his life his devoted wife Rebecca Morgan; daughter Kelly Morgan and grandson Ryan Osborne; son and daughter-in-law Mark and Laura Morgan, grandson Casey Morgan and another grandson due in May; his sister, Carole Bunker, brothers, Phillip and Michael; many other family members and an array of lifelong friends.
Dad and me in 1968 at my aunt's wedding. I was three years old. 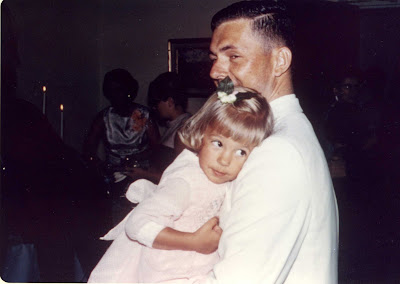 Dad and me at Delta Delta Delta sorority Dad's Day in 1985. We're on the bus on our way to a Bruins' football game. 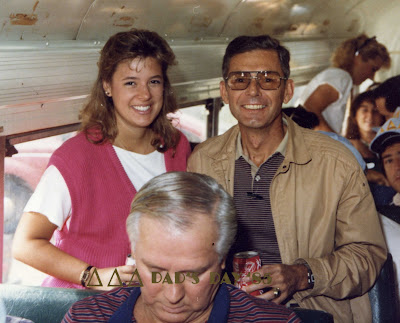 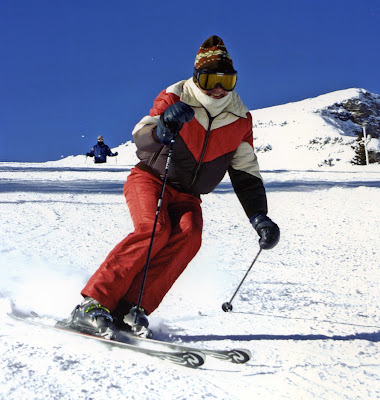 Dad was an amazing, accomplished, intelligent guy with a wicked sense of humor. The world is a poorer place without him and we will never forget him.

Just a quick note to say that yes, I'm back from vacation, but I will probably be a bit scarce around here for a while. Or not - the writing might help me. I don't know yet.

With the exception of the bad news, the vacation trip was great. We had a fantastic time in Palm Desert and the weather was perfect. I've got some great pictures I hope to post as soon as I have time to get them downloaded frrom the camera. That sorta depends on how things go over the next couple of weeks.

I got some jewelry made and some new beads came in while I was gone so I've got those pictures, too. There just may be some gaps between posts.

Thanks to everyone for the wonderful comments - they really brighten my days!!

45 more minutes until I am officially on vacation. Not that I'm watching the clock or anything. And really, vacay doesn't start until I'm at the pool tomorrow with a pina colada in my hand because tonight I have to finish the packing and the checking off of things on my various "don't forget to pack _______" lists and charging the cell phone and headset and putting gas in the car and cleaning out the parrot cage and charging up the portable DVD player for the kidlet to use in the car and, and, and...
Well, you get the idea. That pina colada will be well earned.
It's also starting to hit me that this vacation will have its bittersweet moments. Staying at this particular location was the last thing we all did as a family (my parents, my brother and nephew and me and my son) just a couple of weeks before my dad had his stroke back in November. We all had such a good time so I'm very thankful for the memories, but it's also hard to realize that dad will never play in the pool with my son again or sit at the poolside bar drinking his own frou frou drink of choice while I have my pina colada or help me up and down the stairs with unloading the car and all the other stuff we did together that I miss about him.
Mom won't be joining us either because she won't leave dad and while I wish she would take a break for herself, I can't help but admire her steadfast devotion to him. After all, isn't that what we all hope for from our life partner - that he or she will be there when we're in our darkest hours?
Okay, well, now that I've depressed the heck out of everyone (hey, there's a reason that alcohol keeps getting mentioned in this post), how about some jewelry?
I decided last month that I hadn't made enought bracelets lately - have been mostly stuck on earrings and necklaces for no real reason other than that's where the beads have led me. So, this set of lampwork was perfect for a bracelet-sized project and that's what it grew up to be. 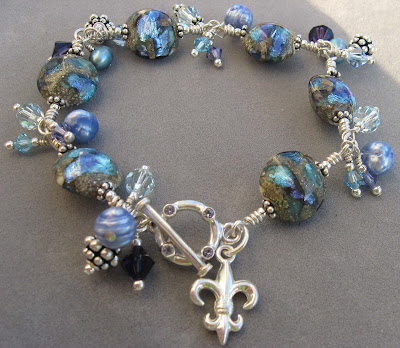 Silvered-ivory glass and blue and purple dichro effects make these lampworked lentil beads look like little planets as viewed from space. I added Bali silver, faceted lavender pearls, Swarovski crystals and LOTS of wire-wrapping and finished everything with a toggle clasp set with lavender crystals and a sterling silver fleur de lys charm. 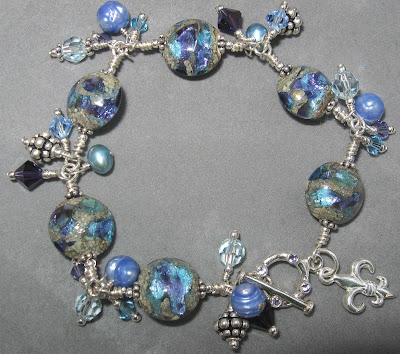 Why the charm? I don't know - it just asked to be added so I went with it.
Okay, that's it for me. See you in a week.
Bonnes vacances!
KJ
Posted by Silver Parrot at 4:20 PM 3 comments:

And back to beads...

Still busy. Still in vacay mode (why isn't it Friday at 5 yet?) Still have a million things to do to get ready for the trip - like packing my project bag with some things to work on while I'm out there (which, of course, I will have NO time to do because the kidlet will want to spend all day at the pool but which I will take anyway just like I've done for the last 4 years because I am a slow learner or hope springs eternal or something cliched like that).
So, beads: 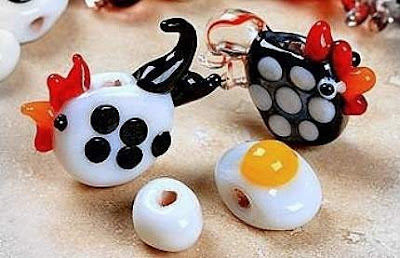 Okay, I know, chicken and egg beads are not exactly "glamorous" and certainly not in the league with the other beads I've been posting lately, but when I saw this set (came with lots more chickens and eggs and spacer beads than pictured here), I just HAD to have it. Why? Well, y'see, I work for a medium-sized restaurant chain's corporate headquarters. This chain is very well known on the West Coast and getting better known in other parts of the country. What's the name of the company? Well, let's just say we're "crazy" about our chicken. I thought these beads might make fun gifts for some of my friends around the office. 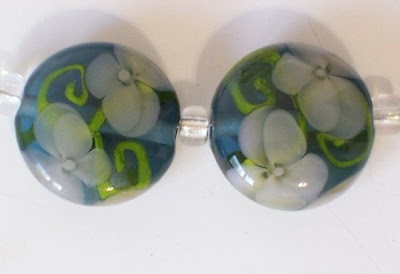 I've been eyeing this artist's beads for a while and then a friend bought some and when they came in and I saw how beautiful they were (and perfect for earrings), I just had to have 'em. 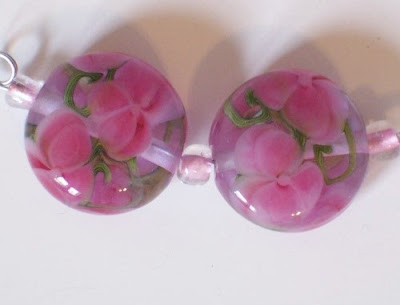 And, not being content with just one set (because they really are SO PRETTY) and because I don't work with pink or red often enough and am trying to push myself to expand my color palette, I had to get these pink babies. The flowers on them are so sweet! 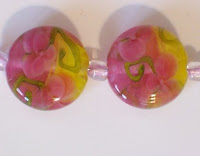 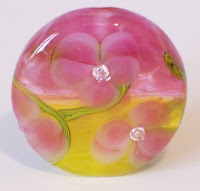 This set is called "Strawberry Lemonade" and since it fit in so nicely with my "buy more pink" strategy and looked so summery and refreshing, it came to live at my house as well. Love the cubic zirconia centers on the flowers in the large focal bead!

Okay, that's it for this edition of "how come she complains about being so busy, but she has time to buy beads?"

Posted by Silver Parrot at 4:44 PM No comments:

I am C-R-A-Z-Y busy. No time to talk. Vacay mode (i.e. must get ridiculous amounts of things done in...yipes...48 hours til I LEAVE!)
Here are some jewelry pics: 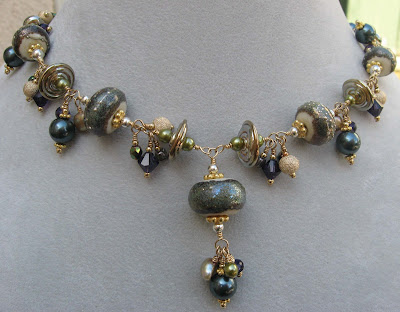 I just LOVE this set of lampwork beads. Ivory base covered in the most amazing frit blend of olive, teal, purple and gold and accented with glints of real silver wire. The spacers are a reflective gold/silver glass lampworked into spiral shapes and also two small rounds towards the back of the necklace. I added loads of pearls, Swarovski crystals, gold stardust beads, Bali vermeil and did some wire-wrapping to put it all together. 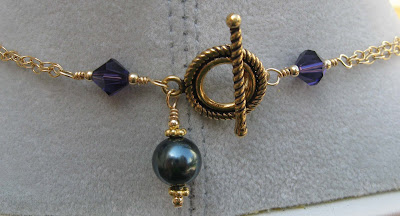 The back 1/3 of the necklace on each side is chain and then I finished everything off with some Swarovski crystals, a toggle clasp and a pearl dangle. 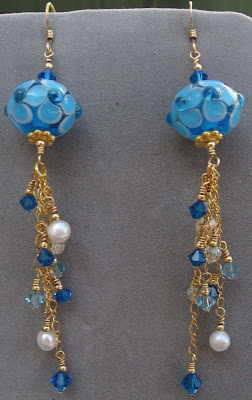 These lampwork beads are the same as the "Rose Princess" earrings I posted a few posts back except they are this amazing sky blue color. I added long chain dangles dripping with crystals and pearls.

Have a great night!

P.S. Thanks for the comments!