I promised some new pictures and here's the first one. I finished these bead embroidered earrings just in time for my show on Nov. 12th. The scanner, of course, has completely screwed them up as far as accurately replicating the color scheme is concerned, but I'll try to describe them. The centers are dichroic glass cabochons. They have a black background with royal purple and tiny hints of teal in them. I've chosen royal purple, teal and purple aurora borealis (AB) seed beads for the embroidery and used them again in the fringe with the addition of teal crystals and glass daggers. I know it appears in the picture that the crystals and the daggers are different colors, but in real life, they match perfectly and they also match the teal row of embroidery around the cabochons. These babies are glamorously long at 4.25" and I call them "Twilight Teal." And yes, Jenie, I KNOW...get a digital camera and ditch the scanner. I'm workin' on it! 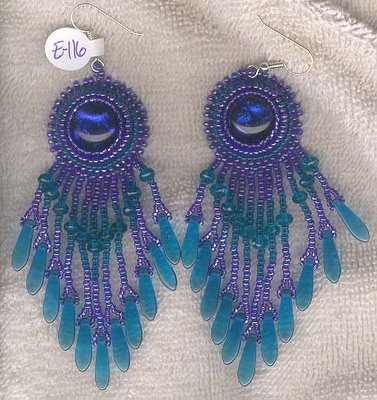 In other news, I've finished a couple of books this week so there will definitely be a new book review this Friday. I've got a cute Christmas set necklace and earrings featuring lampwork and crystals that I'll try to get scanned tonight so I can post a picture tomorrow. And, last but not least, the Christmas sale is definitely ON! It will start December 1st and run through December 18th. I'll make a formal announcement here of all the details later so keep your eyes peeled for that!

KJ
Posted by Silver Parrot at 8:52 AM No comments:

I'm very sad to report today that my sweet cockatiel girl Jimmi passed away at 7:00 AM this morning. She was a very gentle, loving bird who was completely hand tame and would ride around on my shoulder or join me for a snooze on the couch any time. She was also the inspiration for the "Silver Parrot" part of "Silver Parrot Designs." I will miss her terribly - she was a great friend and had been with me for a very long time. I hope that she's flying freely now without any pain or illness and is finding fields full of all the millet treats she wants.

Silver Parrot Designs has been updated to remove the items that sold at the show earlier this month as well as some other sales I've had. The sold items are still available for viewing on the "Gallery" page. While I can never guarantee that I can duplicate something exactly (due to the use of one-of-a-kind artist beads and other rare materials), I'm always happy to discuss the possibility of a custom order and I will let you know whether or not all the materials are still available.

I haven't gotten around to scanning and uploading some of the new designs yet, but perhaps I'll have a chance tonight. I've got a cute Christmas set featuring some nice lampwork and Swarovski crystals and there's also a new pair of bead embroidered earrings in yummy shades of teal and purple. Droooool!!!!

Oh, and Melissa...I'm glad you're enjoying the book reviews! Thanks for the comment!

KJ
Posted by Silver Parrot at 4:06 PM No comments:

Whew! It’s been a long time, but I’m back. Life jumped up and walloped me a good one across the jaw and it’s taken me a while to recover. But, I did manage to work my way through some books while that was happening so I thought I’d herald my return with some reviews.

To start, I’ve got Brandon Sanderson’s ”Elantris” This book had a fascinating premise about a city of nearly supreme beings who literally overnight find themselves stripped of all of their beauty, powers and life. Essentially, they become like the living dead and are walled up in their city to suffer for eternity. To make matters worse, in the town outside the walls, some people seem to randomly undergo the transformation into one of these creatures and are thrown into the city to suffer along with the original inhabitants. I thought that sounded like a fascinating idea and that it had a lot of potential for a good story. Unfortunately, I feel like the author didn’t make the most of what he had available here. The action lags in places and some of the characters are underdeveloped…especially the princess who, in my opinion, was the one person worth reading about in the story. When the resolution to the mystery finally comes (and it takes freakin’ forever to get to it) it’s so incredibly over-simple that it left me feeling very let down. This was a bummer because I really, really wanted to like it. Still, the book does have its moments so I can’t say it’s bad and in fact, it might appeal to someone who has more patience than I do or is not really into high action, high romance stories. But, I’d still say, wait until it comes out in paperback. And use a coupon.

Next, I read Elaine Isaak’s, ”The Singer's Crown.” I could almost cut and paste the review of “Elantris” and put it under this book as well. Once again, the book has a fascinating premise, but it doesn’t quite live up to its full potential. If a palace coup occurred and all the members of a royal family are done away with except the youngest, we’d have the typical “put the dispossessed prince back on the throne” novel. Except what do you do when that prince is, well, surgically unmanned by the new regime? How can a eunuch become king? Throw in a few wizards (both evil and good) a spoiled princess and political intrigue, toss liberally and then try to figure it all out. The story seems to go along pretty well for a while and then there’s a very confusing section where everyone switches allegiances and acts contrary to the characters they’ve been building thus far and it just seems rather silly. Also, the love interest of the Rhys, the main character, I found to be singularly unlikable. Her personality changes happen so much “off stage” that by the end of the book they are not very believable. Again, this turned out to be an “okay” book that could have been so much better. It’s already a trade paperback, but still, wait for a coupon.

Now, let’s move on to the good stuff! Ever since I read Linnea Sinclair’s “Finders, Keepers,” I’ve been eagerly awaiting her next release: ”Gabriel's Ghost” And it was nice to finally have a book that met my expectations after slogging through the two above. This book has plenty of action, romance AND an intriguing plot – my kind of story! Marooned on a prison planet for a crime she didn’t commit, ship’s captain Chasidah Bergren has one chance to escape – take up the life of the type of space pirate she used to hunt down and arrest! But, of course, there’s more to it than that. Seems she has a history with the particular space pirate who’s come to rescue her (which, I have to admit, was one part of the plot I found a bit hard to swallow…the whole “universe is a wide place” thing and all, but it was fairly well explained so I was willing to overlook it). The only other thing I wondered about is that I thought Chasidah was a little too innocent and willing to overlook numerous deceptions (albeit necessary ones) on the part of her love interest, Gabriel Sullivan. But, I’m willing to admit that I might be a tad oversensitive on that score because of certain things I’m dealing with in my personal life right now. I’m pretty much on the warpath against anyone who lies in any way for any reason whether deliberately or by omission and this goes double for anyone with whom I might have a romantic connection. Again, though, this is a minor blip in an otherwise fabulous read. I can’t wait for Sinclair’s next book, “An Accidental Goddess” to come out and I’m on a serious hunt for an older book of hers called “Command Performance.”

Lastly, I finally picked up the first book in Sharon Shinn’s “Samarria” series. It’s been around for a while and I’ve looked at some of the books in the store on numerous occasions but never actually purchased one for whatever reason. But, I’ve enjoyed other works by Shinn so I thought I’d give in and try the first book in the series ”Archangel” I was blown away. This is one of the best books I’ve read in years and I can’t wait to pick up the rest of the series! It’s an extra plus that because it’s been out for awhile, there ARE other books in the series available. I’m so tired of waiting for my favorite authors to get around to pumping out their one book a year. I mean, it doesn’t take me a year to READ the book, so shouldn’t there be something for me to read NEXT when I’m done? Yeah, selfish, I know, but the reading addiction knows no limits! I’m not going to go into plot, etc. on this one because the link at Amazon covers it all pretty well. I will say I agree with the negative comments about the cover art…blech! What a shame to stick that on such a fabulous story and I agree with some of the comments that said it was a deterrent to buying the book. But, now that I’ve previewed it for you, you can buy with confidence knowing that the crappy art does NOT reflect the gem of a novel that’s inside the covers. I’m off to the bookstore tonight to buy the rest of the series.

Okay, that’s it for books. In other news, I did my second craft show as a vendor on Saturday, November 12th, in Irvine, CA. It was a good experience and I definitely preferred the indoor venue vs. the outdoor show I did back in April. I LOVE air conditioning LOL! It was nice not to arrive home as a puddle of sweat. I wish I could say that business was good, too, but it wasn’t as good as I had hoped. I did sell a few pairs of earrings (including my favorite “Moon Goddess” pair…sob!) and definitely made back the booth fee plus more, but I had hoped for a better showing at this time of year. There were a LOT of jewelry vendors, but we all had very different styles and inventory so I don’t think that was really the problem. Still, my assistant was once again my best customer! She now has multiple accessories for every one of her dog show outfits LOL!

I’m still hoping to have some kind of pre-holiday sale via the website again this year so stay tuned for announcements. I’ve got a lot of backlogged work to catch up on after being sidelined for a few weeks and this includes the fact that the website inventory needs a major update as a result of what was sold at the show. I’m hoping to get that done this week and I have some new pieces to upload as well.

Other than that, I’m just looking forward to a relaxing Thanksgiving weekend with my family and my first piece of pecan pie for 2005. I get to eat it 2x a year – once on Thanksgiving and once on Christmas and it’s my FAVORITE!