THANK YOU so much to everyone who sent birthday wishes of both the virtual and real kind. My in-box AND mailbox were overflowing and it certainly made getting older (again) a little easier to bear. You have no idea how much the comments and good wishes really mean to me...not just on my birthday, but every day.

And, I'll be showing off all my prezzies just as soon as I get some photos taken! I was actually crying with joy after opening all the wonderful stuff and I am not a cryer so you guys REALLY got to me!

Next, if you haven't been checking out the Bead Soup Blog Party Hop - what are you waiting for? Lori is posting the links for each day on her blog so you can go check that here. I'll be posting MY version of the soup on Thursday, 6/24. I will tell you that procrastination was a main ingredient, but I did finally manage to finish everything over the weekend and all that's left is to take photos.

I took Friday off to enjoy my birthday. Did some shopping at Michael's and at Lowe's. Although it's not as exciting to buy your own presents (no surprise factor), there is the bonus of always being sure that you get what you want ;-) My main present to myself was a Dremel! Finally! I'm still trying to overcome my fear/lameness at drilling and other non-foofy crafting skills. I tried to get away with a cheapy electric screwdriver several months ago, and it was just laughable. So, with birthday money in hand (thanks, Mom), I finally gots me a Dremel. I am sure much disasterdness and hilarity will ensue.

But then...I needed more fodder for blog posts anyway so it should be a win-win.

I also took myself to see the "A-Team" movie. It was just as silly and over-the-top as the old TV show and I loved it just as much. Plus, Bradley Cooper! Wooooooo! Hottie alert! I've seen him in other stuff, but this was the first time I got the really SERIOUS hotness factor.

Saturday we had my family birthday party at the beach. The weather cooperated in that it wasn't overcast (sometimes a problem in June around here) and the water had warmed up. Unfortunately, the warming up of the water caused an algea bloom known as a "red tide." Soooo...the water was kind of a funky, reddish-brown, icky color. You can still swim in it and it won't hurt you. It just looks kinda gross. Ryan caught waves on his boogie board for the very first time and was THRILLED. I think I witnessed the birth of a surfer. Then again, he comes from a long line of surfers including me, his uncle, his grandfather, his great uncle (who is still surfing) and several cousins.

Nothing else super-interesting happened so here's some resin stuff I made a couple of weeks ago, but haven't posted about yet: 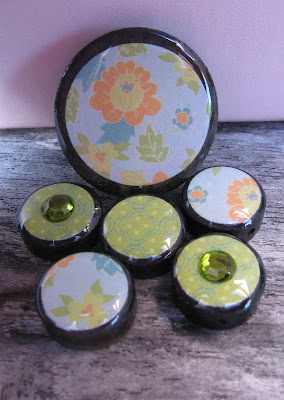 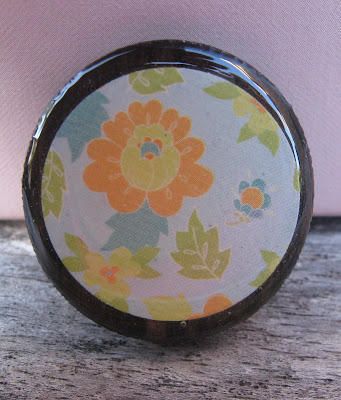 I thought it would be fun to do a few coordinated sets instead of just focals. I used some coordinating sets of scrapbook paper that I got on sale at the local craft store's going out of business sale. I added crystals and charms on a few of the sets (like this one) as embellishments. 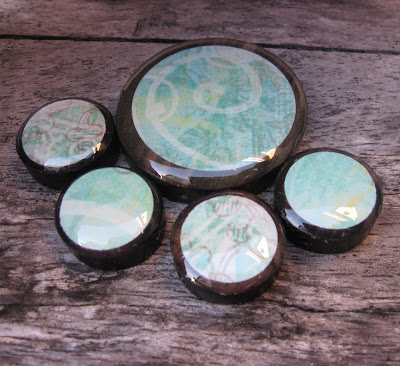 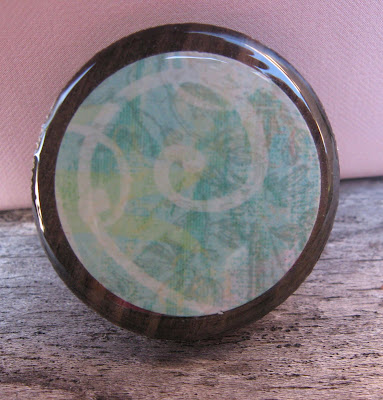 Others, I just left plain, like this set, because the paper was already so pretty on its own. 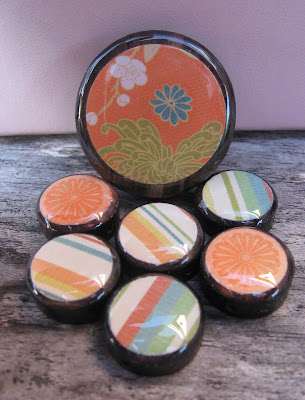 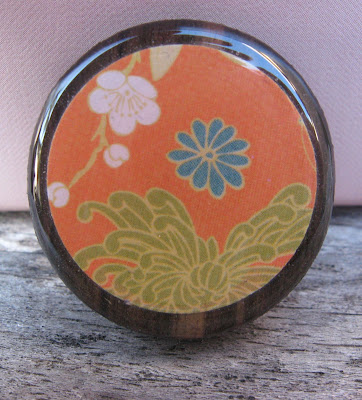 It was incredibly difficult to get good photos of these -the glass-like finish of the resin just reflects everything back at the camera. It's not as bad on cloudy days, but this day was sunny. 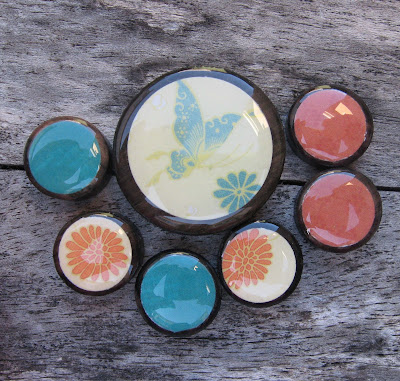 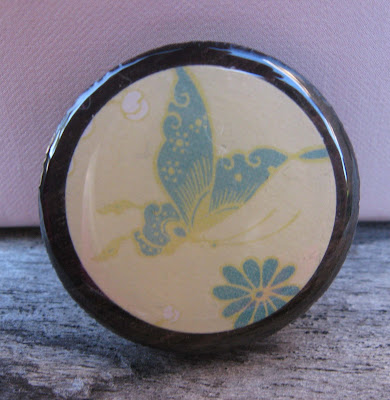 And this pale yellow? SO hard to get a good photo! It's actually not as pale as it appears in the picture, but it was either that or have glare on it. 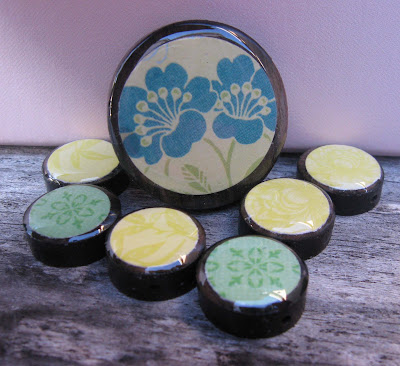 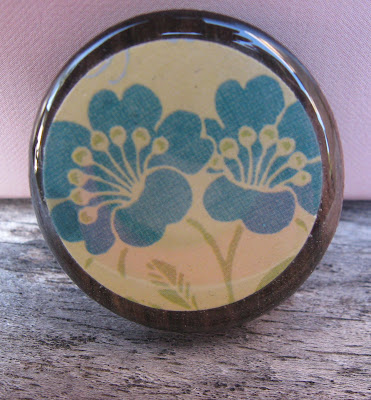 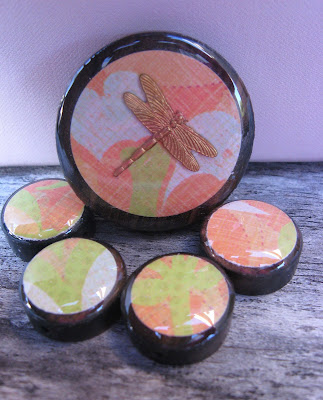 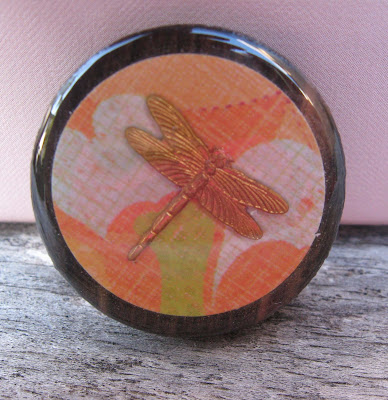 (Note: I am having a devil of a time finding cute, flat charms that are small enough for my resin projects. If anyone has a good source they'd like to share - I'm all ears!) 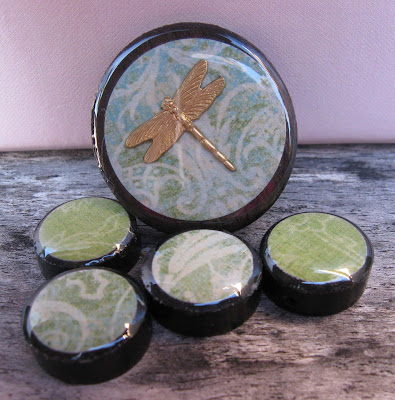 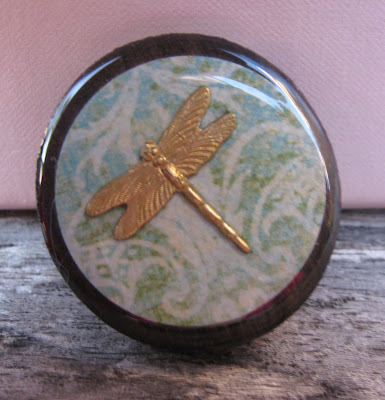 Pale blues, mossy greens and ivory with a brass dragonfly charm. This set is my favorite, by far!

Okay, that's it for a Monday.

Posted by Silver Parrot at 4:08 PM

I may have wished it before but in case I didn't HAPPY BIRTHDAY!!!! I love the resin sets! They are AWESOME!